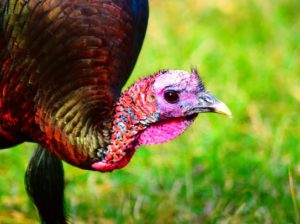 When proposing a national symbol for the United States, many of the founding fathers looked towards the Bald Eagle for their intimidatingly strong beaks and wings built for soaring; however, a myth has circulated in American culture that Benjamin Franklin had a different idea. Wild Turkey or Meleagris gallopavo, were thought to have been Franklins’ muse with adult males having the charismatic face coloration of red, white, and blue. This myth has been disproven since, and his “grand idea” was ultimately shot down, but Wild Turkeys still play a large part in both America’s ecosystem and Thanksgiving dinner.

Adult males, or gobblers, are known to get this red, white, and blue face coloration when strutting, a practice used to attract a female for breeding. This coloration is universal throughout the Wild Turkey subspecies; however, some morphological characteristics vary based on regional location. Wild Turkeys are located in all 48 continental US states and Hawaii. In comparison to Georgia turkeys, Wild Turkeys located in the southwest have lighter feathers. Female turkeys will have lighter feathers than males and lack iridescence, regardless of location, to help camouflage them while brooding.

Females will lay anywhere from 4-18 eggs a year, with the average range being 10-15 eggs. Instead of laying all the eggs in one day, the female turkeys will lay one egg a day and start the incubation period after the last egg is laid. Wild Turkeys will not build a nest, like most songbirds, but will nest on the ground at the base of a tree or a shrub. This is common within their order, Galliformes, and sometimes will occur in their family Phasianidae. Other birds within this taxonomic family include the Ring-necked Pheasant, Prairie-chickens, Ptarmigan, and Grouses. 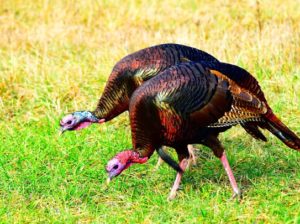 Wild Turkeys also consume a more diverse diet than meat turkeys, because of their need to scavenge rather than eat an artificial diet. Wild Turkeys are omnivores, eating a diverse diet of berries, grass blades, bulbs, insects, snails, amphibians, reptiles, and sometimes crabs. In order to locate some of their prey species, Wild Turkeys will scratch leaf litter to reveal yummy grubs. They are also crepuscular, meaning that they are most active during the morning and evening where they can escape predators more easily and avoid becoming the next Thanksgiving meal.

“Wild Turkey.” The Cornell Lab: All About Birds. https://www.allaboutbirds.org/guide/Wild_Turkey/lifehistory#