State Butterfly is a Beautiful Sight 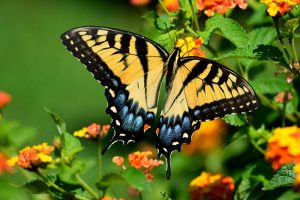 The most common North American butterfly, the tiger swallowtail, was among the first creatures of the New World documented by European explorers. It is also the state butterfly of Georgia.

Receiving its name from the yellow wings with black “tiger markings” and the tapered tail-like extensions at the bottom of its wings, the male Swallowtail is a beautiful and impressive sight darting among the flowers as it feeds. The coloring varies but the female’s is more subdued: brown to black wings with yellow spots. Both sexes also have blue markings along their hindwings.

Typically found in the fields and woodlands, the tiger swallowtail is drawn into urban areas by flower gardens where it will spend its short life among nectar and members of the opposite sex. The female distributes its 250 or so eggs throughout many trees to ensure adequate nutrition for the caterpillar when it hatches. While the adult butterfly can easily escape enemies, the slow caterpillar relies on a threatening facade of large fake eyes and horns to deter predators. In fall, the caterpillar attaches itself to a twig for the pupal stage in which it remains through the winter before emergence in the spring as a tiger swallowtail. To attract butterflies such as the swallowtail, locate your garden in a sunny area and use nectar-producing flowering plants with large splashes of color. Plan on continuous color throughout the season and include shallow puddles or damp areas. The swallowtail often lays its eggs on such indigenous trees as birch, wild cherry, tulip, and ash – these would be ideal nearby. One pleasant byproduct of a successful butterfly garden is often the attraction of hummingbirds that are drawn to a similar habitat.