The Red-shouldered Hawk – Dancing for their Date 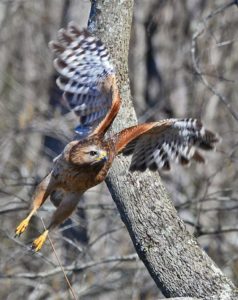 The Red-shouldered Hawk (Buteo lineatus) is a medium-sized raptor found almost all-over North America. This one species of bird is divided into five subspecies, with four along the east coast, and one along the west. Most researches use feather-color variation to differentiate each subspecies; however, with four of the five subspecies located in close proximity to one another, this often gets tricky. Generally, the four subspecies found along the east coast look similar, with the northern species having more brown coloration, and the southern having pale gray instead. The biggest difference between all the subspecies is found between these eastern hawks and the western. These western subspecies of hawks are separated by a 1,000 mile stretch of land between the eastern and have a charismatic rusty-red head.

Between all the subspecies, these hawks use a wide array of habitat locations, with their primary requirement being an open canopy to help ensure hunting success. They can be found in hardwood stands, mixed deciduous, conifer forests, swamps, eucalyptus groves, and even some residential areas. Here they hunt animals found in five different classes: fish, mammals, reptiles, amphibians, and sometimes other small birds. After hunting, Red-shoulder Hawks are often mobbed by American Crows, who want to steal their meal. But recent research has revealed that while this behavior still occurs, the relationship between these two birds may be more complex than we think. Often, both the Red-shouldered Hawks and the American Crows will form a mutualistic relationship and chase out any other raptors within their habitat to eliminate further competition.

While some believe this relationship is the most unique behavioral trait of the Red-shoulder Hawks, other interesting behaviors have been documented during the breeding season. Unlike most birds, Red-shoulder Hawks will often reuse their nests year after year and will lay a clutch size of 2-5 eggs. Because both male and female hawks build the nest together and will share the rearing duties after their young hatch, courtship rituals will occur prior to the mid-spring nesting season. During courtship, the male hawk will soar in circles, dipping and flapping to create a beautiful show for their future mate calling every chance he gets. If well-received the two hawks will often begin to circle their territory together before they begin to build their nest. Hatching of the young occurs about 36 days after eggs are laid and leave the nest only 45 days later. After only a quick year of living on their own, the young will reach maturity and begin to dance in the sky for their mate, finishing the hawk’s lifecycle.

Special thanks to the following websites for their information: