Georgia would get $27.4 Million Annually to Help At-Risk Wildlife 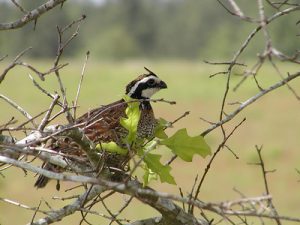 COVINGTON, GA (December 7, 2022) – Conservationists are hopeful a bipartisan proposal to dedicate $1.4B a year to helping at-risk wildlife will get a Senate vote before the end of the year.

More than 40 Senators are cosponsoring the bill, including sixteen Republicans and Georgia Senators Warnock and Ossoff. A recent Data for Progress poll found that 86 percent of voters nationwide support the bill.

“This is a bold, bipartisan solution that is as big as the problems wildlife face,” said Mike Worley, president and CEO of the Georgia Wildlife Federation. “The bill has broad support because it protects wildlife while saving money by allowing the states to step in quickly when a species starts to struggle. With a little luck, this commonsense, cost-effective proposal will pass before the end of the year.”

The whistling call of the “prince of game birds” – as some call the bobwhite quail – was once a common sound in Georgia. Nationwide bobwhite numbers have plunged by as much as 85% since the 1960s. Funding from Recovering America’s Wildlife Act will be put to work to restore habitat for species already in peril like the bobwhite, and fund preventative measures to catch other species before they decline to the point of no return.

The bill will also dedicate $97.5 million annually to wildlife conservation efforts led by the 574 federally-recognized Tribes that collectively manage tens of millions of acres of land nationwide.

“Tribes have thousands of years of traditional knowledge and a vested interest in solving the biggest challenges facing our fish and wildlife. The missing piece of the puzzle is adequate, sustained resources,” explained Gloria Tom, Director of the Navajo Nation’s Fish and Wildlife Department.

The U.S. House of Representatives passed the Recovering America’s Wildlife Act on a bipartisan basis in June. Now it’s the Senate’s turn to move the legislation across the finish line.

“There is consensus across the political spectrum that we should prevent extinctions from our backyards to the backcountry,” said Collin O’Mara, president and CEO of the National Wildlife Federation. “However, inaction is the ally of extinction, and that’s why we need Congress to get this done now.”

Georgia Wildlife Federation was founded as a sportsman’s organization in 1936 and is Georgia’s oldest conservation organization. Today, members include hunters, anglers, bird watchers, hikers, educators, and all Georgians who are interested in preserving our natural resources and outdoor heritage.