R3: Helping to Secure Hunting and Shooting In Georgia 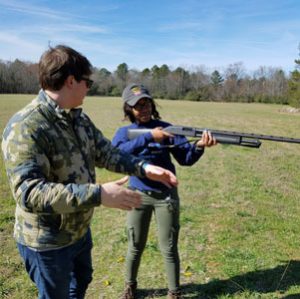 How do you secure the future of conservation, shooting sports, and our hunting heritage?  Georgia is leading the nation in the quest for the answer.

With a nationwide general decline in hunting participation since the 1980s, the leaders in the conservation community have come together, recognized the gravity of the situation, and made a serious shift in the way we are tackling the issue.  A national plan was recently developed by the Council to Advance Hunting and the Shooting Sports (CAHSS) to assess strategies for increasing support and participation in hunting and the shooting sports.  This plan terms these strategies as recruitment, retention, and reactivation (R3).

Georgia has actually seen a recent increase in hunting and shooting participation.  However, despite this recent uptick, less than four percent of Georgians have a hunting license.  We, as sportsmen, are an incredibly small segment of the population and getting smaller.  We need more hunters and people that support hunting, and we’re going to need your help to do it.

Let’s start with why you should care.  More hunters will lead to increased competition for those public land honey holes and less game to chase, right? Wrong.  Believe it or not, there are quite a few hunters and shooters that think this way.  The majority of the time these trains of thought stem from a lack of understanding of why conservation is so successful in America.  Most participants are vaguely familiar with the concept that hunters and shooters support conservation, but few actually know how. I do not exclude myself from that statement; before I earned my degrees in wildlife biology I was clueless as to the exact role sportsmen have played in conservation.

Many of the founding fathers of conservation in America loved to hunt and therefore had a deep connection to nature.  Through the conservation movement sportsmen came to realize the need for a conservation funding source and passed the Pittman-Robertson Wildlife Restoration Act of 1937.  This act, as it stands today, puts a federal excise tax on virtually all firearms, ammunition, and archery equipment sold.

Revenue generated is distributed to the state wildlife agencies based on the land area and number of paid licensed hunters in their respective states.  To receive these funds, the state must match them (one state dollar is needed to receive three federal dollars) and they are required to be used for wildlife management, public access to wildlife, hunter education, or shooting ranges.  Hunting license sales determine not only the amount of federal funds states receive but also generate revenue which goes directly back into conservation.  It is a fact that the number of participants in hunting and the shooting sports directly affects the number and quality of sporting opportunities.  It also directly impacts on-the-ground habitat management that is beneficial to game and non-game wildlife.  Did I mention hunting and shooting have over a two-billion-dollar economic impact in Georgia every year?

Hopefully, the abbreviated history lesson and monetary discussion above is enough to make you care all by itself.  However, as we all know there are numerous other associated benefits that come along with these activities including invaluable time spent with friends or family, healthy food, and extended periods of time spent outdoors.  The latter is especially important with the continued disconnect from nature, now commonly called the nature deficit disorder, becoming increasingly common in our country.

Now, let’s get back to the R3 movement.

Representatives from Georgia have been involved with the national plan development since inception.  In fact, in a recent conversation I had with John Frampton, the president and CEO of CAHSS, he said, “Your state is leading the country in their commitment and focus on R3 efforts.”  What was John talking about, why is Georgia leading? That’s where I come in.

What was John talking about, why is Georgia leading? That’s where I come in.

I am the Georgia R3 Coordinator and we are the first state to hire a coordinator under the direction of the national plan.  I am employed by the Georgia Wildlife Federation, with additional support for my position being provided by Georgia Department of Natural Resources Wildlife Resources Division, Safari Club International, Quality Deer Management Association, and National Wild Turkey Federation.  My goal is to develop and implement a plan to increase the effectiveness of current and future R3 programs and serve as a conduit for all those working in the R3 arena in Georgia.

What is an R3 program you say?  That’s a great question – I’m still trying to figure that out myself… in all seriousness though, it all comes down to the intent of the program.  If the intent is to recruit, retain, or reactivate a participant, then we consider it R3.

Let’s dive into those three words a little more.  Recruitment programs are focused on awareness, interest, and trial opportunities.  These programs provide participants, that have had no exposure to shooting or hunting, with that first crucial contact.  Once participants are recruited, retention is the next step.  Some people will continue hunting or shooting without future support or programs, but many need a little more guidance.  On the hunting side of retention, we call many of these “hunt and learn” programs which provide guidance on everything from what to wear, where to hunt, what scouting is, and what to do after an animal is harvested.  Once you become a hunter or shooter and continue for a few years, that’s it, right? The job is done?  Well, unfortunately, many hunters lapse and aren’t able to hunt due to time constraints or other responsibilities.   That’s where reactivation programs come into play.  These efforts re-engage previous hunters. Similarly, someone who previously participated in the shooting sports may stop, for various reasons, but if offered opportunities and support at a nearby range, may well re-engage in the sport.

Now that we have a brief explanation of R3 out of the way, you may be asking yourself, “If we have all of these excellent programs currently in place why do we need an R3 Coordinator?”  Yes, we have numerous excellent programs in Georgia, but we really don’t know what impact they are having or if we are even targeting the most effective audiences.  The majority of these programs are focusing on youth and there are many potential participant pools that are left untapped.  This is precisely why the national R3 plan was formed and why Georgia wanted an R3 coordinator to evaluate the current programs and write a strategic plan to ensure we are taking the most efficient and effective path possible with our program development.  If these organizations have a plan set forth, a way to track success, and partnerships so each organization doesn’t bear the weight of trying to tackle R3 all by themselves, we will see great returns.

We’ve talked about the direction of my coordinator position, now let’s talk about what you can do.  Social support is the overarching theme of R3, and without it, we will have limited success welcoming people into our traditions.  When you’re just starting out, hunting can be a very intimidating activity.  Do you know someone that wants to learn to shoot or go hunting? Take them, no matter their background or beliefs.  With the urbanization of Georgia, we have many people that are never offered the opportunity to do either. Once again, I am not just talking about youth. You might be surprised by the number and variety of adults who are open to the idea of shooting and hunting.  We currently have a golden opportunity with the organic and locavore movement.  These people want all natural meat and many are interested in learning to harvest it themselves.  They may have never thought of hunting previously and probably even had a negative view of it.  Don’t frown on someone just because they have different views and are from the city.  Instead, take that opportunity to be kind and educate them a little bit with the facts about conservation funding and where it comes from.  You might be surprised how curious they are and just how little effort it takes to convert them into a hunter or shooter.

Get involved with organizations that are making a difference, volunteer your time, and research the benefits of hunting and shooting so you can carry the facts around with you to present to anyone that shows interest.  We will only be able to make a difference if we work together as a unified front empowered by the facts.  I’ll leave you with one of my all-time favorite quotes from archery legend Fred Bear, “If you are not working to protect hunting, then you are working to destroy it.”