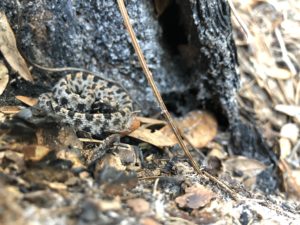 Photograph is taken by Peyton Niebanck

Pigmy rattlesnakes (Sistrurus miliarius) are found all over the Southeastern United States. Known for their mid-dorsal spots that range from black to reddish-brown, this snake is one of the six venomous snakes native to Georgia (eight if you include the two species of hognose snakes that contain venom harmful to amphibians). Pigmies are unique among the other rattlesnakes because of their small rattle that often is too little to even produce a noise! Pigmy rattlesnakes also can be spelled “pygmy” with the accurate nickname, “ground rattler.” This nickname originates from the cryptic nature of this snake which spends most of the day under leaf litter, waiting for unknowing prey to walk by.

With the stigma surrounding venomous snakes bad among the animal kingdom, pigmies actually play an important role in maintaining balance within the ecosystem. They can live in a wide variety of habitats, with the Dusky subspecies found near water sources, and the other subspecies, the Carolina pigmy, located in more xeric (dry) spots. In both habitats, pigmies serve as an intermediate predator, eating lizards, frogs, small mammals, and insects, while also serving as a food source for many raptors and larger mammals. Young pigmies, also known as hatchlings, are more advanced predators, equipped with sulfur-yellow tails that act as lures when hunting; this process is known as caudal luring.

Photograph is taken by Peyton Niebanck

While many Georgia residents still have a growing concern about venomous snakes, it is important to diminish some of the fear with information. Under the IUCN Red List, pigmy rattlesnakes are not considered endangered; however, the probability of spotting a pigmy in your backyard is rare. Also, pigmies are motile creatures, meaning that they are more likely to run away from predators (and humans) than strike. So, here at Georgia Wildlife, we do not condone the mishandling of wildlife, especially ones with venom. We encourage our members to respect these beautiful Georgian natives from a distance!

Thank you to the following sources for their information: