“We’re facing a wildlife crisis. The U.S. Fish and Wildlife Service recently announced that 23 species – including four once found in Georgia – are almost certainly extinct,” said Mike Worley, president & CEO of the Georgia Wildlife Federation. “We thank Senator Ossoff for co-sponsoring this bold, bipartisan effort to help at-risk wildlife with collaborative, voluntary measures across every state, territory and Tribal nation. We believe this is the most important piece of wildlife legislation in the past fifty years.” 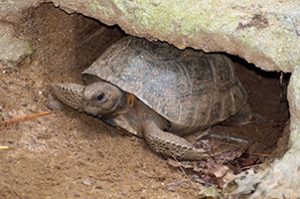 The legislation would provide $27.4 million for the Georgia Department of Natural Resources to fully implement the state’s Wildlife Action Plan. More than 640 Georgia species would benefit, from bobwhite quail and gopher tortoises to Georgia aster and Cherokee darters.

Dr. Jon Ambrose, chief of DNR’s Wildlife Conservation Section, explained that the plan is a statewide, partner-supported strategy to conserve native wildlife and natural habitats before these animals, plants and places become rarer and more costly to save or restore.

Collin O’Mara, president and CEO of the National Wildlife Federation, said saving the thousands of at-risk wildlife species will require “bold, bipartisan leadership and unprecedented collaboration. We are so grateful to Senator Ossoff for leading the way on the historic Recovering America’s Wildlife Act that will have an immediate impact – saving species and creating jobs in Georgia and all across the country.”

Representatives Austin Scott, Hank Johnson, and Buddy Carter are among the more than 130 bipartisan supporters of the House version of the legislation.

“Wildlife conservation is an issue that unites all Americans. We hope Senator Warnock will join Senator Ossoff on this Senate bill, and we hope the rest of the congressional delegation will join Congressmen Austin Scott, Hank Johnson, and Buddy Carter in cosponsoring the Recovering America’s Wildlife Act on the House version,” said Worley.