The Northern Flicker- The Anteaters of the Sky 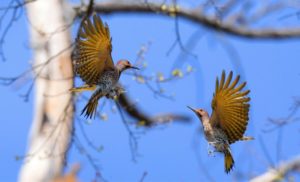 With southern migration season picking up, the Northern Flicker’s (Colaptes auratus) coloration is well-deserving a feature during the fall season! The Northern Flicker is a species of bird found within the family Picidae, which includes other woodpeckers. While their diet, bill shape, and pattern of flight are similar to other species within Picidae, the Northern Flicker is considered a “black sheep” among their family; or rather a “brown sheep.” Most woodpeckers found within North America are easily identifiable by their striking black and white feather coloration; however, in the case of the Northern Flicker, their overall body is brown in color with a few black speckles on their breast feathers. While these speckles aid in the identification process, the Northern Flickers are most commonly known for their patches of bright yellow or red, depending on location. The Northern Flicker’s home range spans from Alaska to the east coast of North America, avoiding the Pacific flyway. Within this range, feather coloration varies. In the west, the body and head coloration look similar to the other color variation, with feathers underneath the wings and tail accented in red. On the east coast, all red feathers are replaced with yellow.

These two color morphs, also known as races, of the Northern Flickers, are known to interbreed where their habitat range overlaps. Hybrids look like a mix of the two colorations and helped researchers discover that this is one large species instead of two. While males and females will both have the brightly colored accent feathers, there are external characteristics used to sex the birds. Male species will have a mustache stripe right above their beak, with the eastern race having a black stripe and the western having a red stripe. During breeding season, which occurs during late spring and early summer, male Northern Flickers are known to face off in a display to competing males. This act is called a “fencing duel.” Within a duel, the two males will defend their breeding grounds by bopping their heads, pointing their bills, and even creating figure-eight patterns within the sky while calling. The name flicker comes from a particular part of this duel, where they will flick their wings and tail up to show off their colorful feathers.

After mating occurs, both males and females will help raise the hatchlings. Brood sizes vary from 5-8 eggs, with northern species having clutches once a year, and southern species having at most two per year. Nesting locations vary based on habitat, but dead trees are the preferred roosting location. During the day, females will take care of the eggs or hatchlings while the males defend the nest. At night, the roles are reversed. Both parents and hatchlings are known to eat a high protein diet, consisting primarily of insects. Northern Flickers can also eat fruits, berries, seeds, and nuts if the insect populations are low. One researcher in Wyoming even documented Northern Flickers consuming young bats as they emerged from their roosts. While prey species like bats are not a common part of the bird’s diet, ants are. In fact, Northern Flickers are considered to be the number one consumer of ants out of every other North American bird; thus, awarding them the nickname the “ant-eaters of the sky.”

Northern Flicker Identification. The Cornell Lab: All About Birds. https://www.allaboutbirds.org/guide/Northern_Flicker/id. Accessed on 23 September 2020.