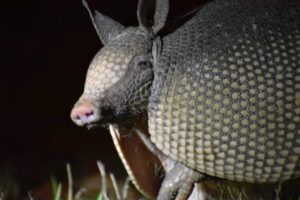 The nine-banded armadillo (Dasypus novemcinctus) is a mammal that thrives off the expansion and relocation of humans. They once were limited on their ability to migrate by America’s large rivers and lack of temperate habitat; however, while people altered their environment to best suit humans, armadillos also got the chance to thrive with them. Without humans, armadillos relied on two physical adaptations to protect them from location to location: their hard “shell” and their advanced digestive system.

Every year armadillos continuously grow and shed their “shell” forming what researchers call armor. While some think that their amour is closely related to turtle shells, human fingernails share more similarities. Armadillo’s armor does have scales, which are called osteoderms, much like turtles but the scales are shed throughout the year, more like fingernails. This adaptation allows for armadillos to stay well-protected throughout the year, instead of having a complete shedding period. Armadillo armor is also made out of the same material as fingernails, keratin! This protein allows for ultimate protection from predators and flexibility that is key to burrowing in tight spaces.

Armadillos rely heavily on their stomach to get them from place to place. Not only are they adapted to eating different types of species, including ants and some small mammals; but their stomach even helps them breathe underwater. Well not exactly, armadillos have adapted over generations to use their digestive tracts as an extra reservoir, or balloon for extra air when their lungs run out. This is because armadillos are more suited to digging burrows rather than swimming, so they need the extra air when crossing bodies of water too large to walk around. In the case of large bodies of water, armadillos will even opt for walking across the bottom of the river or stream to use the least amount of energy and oxygen possible.