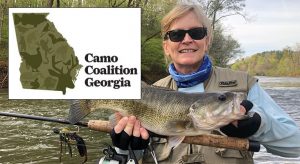 Thank you for your continuing participation in the Camo Coalition network. Your involvement makes legislators and regulators – the folks that set the policies on our wildlife, game, sportfish and natural resources – take notice. Your engagement in the past has made a real difference in providing more resources for our game management and more public lands for hunting and fishing. Truthfully, Camo Coalition’s reach has proven itself time and again at the Capitol.

The 2020 Georgia General Assembly continues to be dominated by budget issues. There has been almost no hugely impactful legislation to affect our Camo Coalition network, though a few bills of interest are out there.

HR 164 passed the Georgia Senate and will be on the ballot in November as a constitutional amendment. While not typically a measure we would engage Camo Coalition, it is a victory for open and transparent government. The amendment will prevent the General Assembly from appropriating — some say raid — many of the “trust funds” that have been established for specific reasons.  Examples are the solid waste trust fund and the hazardous waste trust fund. While the need for those funds to clean up waste sites is apparent across Georgia, the money they have generated has often been appropriated by our state government to fund general operations. This constitutional amendment will end that practice except in emergencies. You will know when you pay a $1 tire disposal fee, the money will actually go to clean up illegal, and hazardous, tire dumps.

Every year, the Georgia Department of Natural Resources submits a bill to codify the actions of the Georgia DNR Board during the preceding year. Often referred to as their “housekeeping” bill, it is rarely a bill that engenders a tremendous amount of interest. This year, however, at least for us, HB 998 does have an item of note. The traditional housekeeping bill would also make the Shoal Bass the Official Riverine Sport Fish of Georgia. This has been a legislative item supported by Georgia Wildlife Federation for four years and we are DELIGHTED to see Georgia DNR on board. This initiative provides no additional protections for shoal bass nor establishes any formal regulatory regime…it simply promotes a new, fun fishing experience that is almost exclusively a Georgia fishery. It also has the benefit of being an initiative started by a group of students as part of a project to see if they can influence laws and get things done.

Some might chuckle and some might say “what the heck” at SB 488. This bill allows “anyone 80 years old or older that didn’t take all the turkey gobblers to which their license authorized in 2019 to carry the unused portion forward to the 2020 hunting season.” Huh?  Remember a former president from Georgia that is an avid turkey hunter and didn’t get to take all his toms last year because he broke his hip? After his accident, missing turkey hunting was the main thing President Carter was publicly upset about. At the time, the Carter Center issued a statement, “President Carter said his main concern is that turkey season ends this week and he has not reached his limit. He hopes the state of Georgia will allow him to roll over the unused limit to next year.”

Great or small, old or young, Presidents or paupers, we share a common passion for our outdoors and our hunting and fishing heritage. Thank you for your involvement in Camo Coalition. Thank you for staying up on the issues by reviewing our website. And thank you for being ready, at a moment’s notice, to defend or promote.

Be ready. The General Assembly session is approaching its final, frantic days and we may have to call on you.