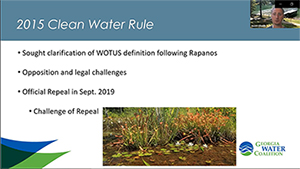 In May GWF hosted the first-ever virtual spring membership meeting for the GWC. We had 108 GWC members join us on Zoom for an opportunity to learn about current water issues and legislation.

Did you know that the Georgia Wildlife Federation helped to organize and start the Georgia Water Coalition almost 20 years ago?  The Water Coalition began with four organizations and now has over 270 businesses, clubs, non-profits, neighborhood associations, faith-based groups, and farms as members across the state. I was hired by GWF in 2011 to work on conservation issues and to be the liaison between GWF and the GWC. Over the years my position has morphed into being the full-time Director of Operations for the Coalition.  Mike Worley and I serve on the Leadership and Legislative Teams of the GWC and advocate for clean plentiful water for all Georgians and for the benefit of our fish and wildlife. In May GWF hosted the first-ever virtual spring membership meeting for the GWC. We had 108 GWC members join us on Zoom for an opportunity to learn about current water issues and legislation.

The Georgia Water Coalition had a very successful 2020 legislative year despite the pandemic and the delayed legislative session. For over a decade the GWC has worked to pass a Resolution that would allow the voters to decide if fees collected by the state should be used for their designated purposes. For example, currently, if you pay a solid waste fee at the landfill or pay a fee to dispose of your old tires, the money goes into the state’s general fund and only a portion is used to clean up hazardous waste sites and tire dumps. HR 164 was championed by the late Rep. Jay Powell and key support was provided by The Association of County Commissioners of Georgia and the Georgia Municipal Association. HR 164 passed with language that clarifies under a fiscal emergency, the fees could still be used some other way, and there would be a cap on how much money would go to the funds. Finally, this November, Georgia voters will decide if a Constitutional Amendment will be created to allow for the dedication of fees.

Here is the wording that will be on the ballot: Amendment #1 – Shall the Constitution of Georgia be amended so as to authorize the General Assembly to dedicate revenues derived from fees or taxes to the public purpose for which such fees or taxes were intended?

The GWC also worked to pass SB 123. The bill was sponsored by Senator William Ligon and raises the surcharge that local governments can charge per ton of coal ash from $1 to $2.50, in line with the surcharge on regular household garbage. The GWC is working to ensure that all coal ash in Georgia is stored in lined facilities. In addition, the GWC activated its members and local farmers and rural property owners to stop the passage of HB 545 which would have altered Georgia’s very effective 30-year-old Right to Farm bill. The proposed changes would have allowed large scale industrial agriculture operations that move into Georgia to be protected from nuisance complaints from existing farmers and property owners. As has been seen in North Carolina, these large concentrated animal feeding operations create a tremendous amount of animal waste which frequently runs off the land into nearby creeks and rivers and contaminates the water.