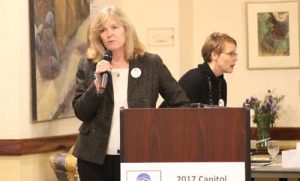 The Georgia Water Coalition was formed in 2002 in response to an initiative to privatize water in Georgia.  The Georgia Wildlife Federation was a founding member along with Southern Environmental Law Center, Georgia Conservancy, and Upper Chattahoochee Riverkeeper.  The Coalition grew and quickly became statewide advocates for Georgia’s water resources. GWC’s first major success came in 2003 with the defeat of legislation which would have allowed for water permit trading and privatization of our state water resources.

15 years later, the Georgia Water Coalition (GWC) is an even more formidable voice for Georgia’s water with over 240 partner organizations from around the state and the southeast. The membership of the Coalition encompasses conservation organizations, farmers, homeowners and lake associations, business owners, sportsmen’s clubs, professional associations, and religious groups. The Coalition continues to speak out and provide information about the critical importance of prudent statewide water management. The GWC effort benefits all Georgians because it asks our leaders to make responsible decisions about how best to protect our finite water resources, now and in the future. Smart water management is paramount to allowing conservation and economic development to exist side by side. The GWC aims to find and implement sustainable solutions to Georgia’s water challenges that maintain the integrity of Georgia’s natural systems and promote public health, while addressing the needs of municipalities, industry, agriculture, and business.

The Georgia Wildlife Federation (GWF) has continuously served on the GWC Leadership Team since its inception in 2002. We work closely with water advocates and decision makers from around the state to protect Georgia’s water resources and ensure clean water for healthy fish and wildlife habitat. We have worked with the GWC on many water issues over the years including: removing ATV traffic from our streams and rivers; maintaining vegetated buffers in our coastal marshes; protecting our groundwater; freshwater stream buffer protections; regulation of large Concentrated Animal Feeding Operations (CAFO’s) that pollute adjacent rivers and streams; drought management to maintain minimum flows in our rivers; advocating for adequate funding for EPD so they can enforce our clean water laws; and  protections for our headwaters and cold water trout streams. GWF has hosted every GWC Partner meeting since 2002.  Most partner meetings are held at our Alcovy Conservation Center in Covington. We also provide staff support for the GWC – Gina Rogers serves as the GWC Director of Operations.

To learn more about the Georgia Water Coalition or sign up your business or club as a member, go to their website at www.gawater.org.