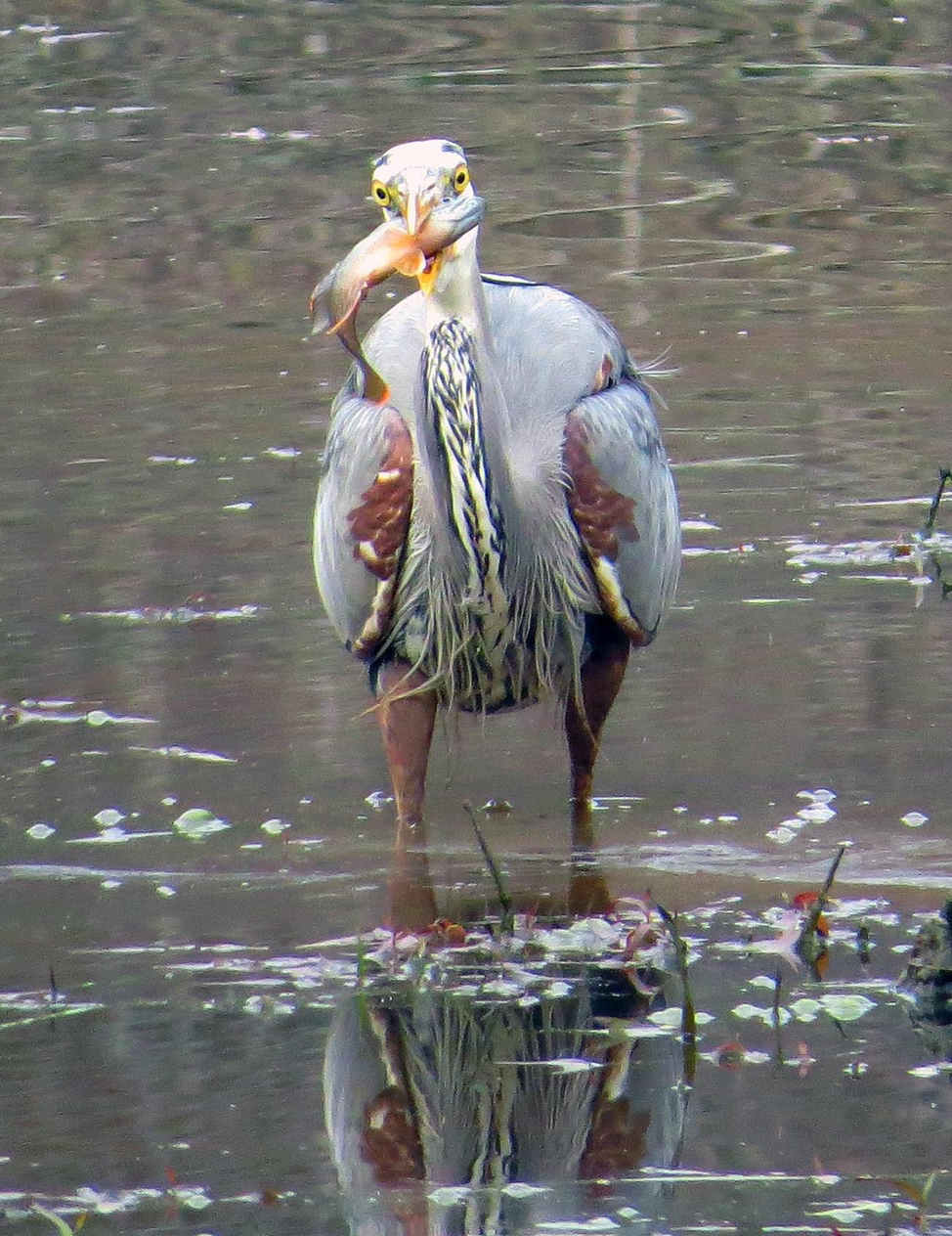 The Great Blue Heron’s (Ardea herodias) name is quite fitting for its outward appearance. This bird, which shares a taxonomic family with other herons, egrets, and bitterns, is a large bird, with an average length of 38-54 inches, which is 5 times greater than a Northern Cardinal. Most of the time, this species of heron is covered in blue-grey feathers and has a black stripe stretching from its “eyebrow” to crown; however, some color variations can occur. Most notable is the “Great White Heron” which has researchers stumped on whether it is its own species or just a subspecies/color morph. Disagreements on this subject started back in the early 1950s when museum-based ornithologists claimed that the two birds were the same, just one had blue feathers, and the other had all white feathers. However, field naturalists began to notice that their behaviors and habitats were quite different from each other. The Great Blue Heron is found in almost any water-rich habitat, while the “Great White Heron” is only found along marine shores. Further research has alluded to more differences such as the “Great White Heron” has a larger bill, a timid personality, and reduced plumes. Yet, the two birds nest together and produce “hybrid species” like the Wurdemann’s Heron, supporting the museum-based ornithologist’s theory. Nevertheless, if you believe these birds are the same species or not, most of the studied natural history assume the birds are one species, the Great Blue Heron, so keep that in mind when reading below.

In order to keep the Great Blue Heron at its large size, it has to eat a lot. In fact, this bird can weigh up to 88 ounces, which is about the weight of 7.3 soda cans! That explains why the wingspan of this bird averages at 72.45 inches long. While most assume the Great Blue Heron only eats goldfish from their pond, they actually can eat other birds, small mammals, amphibians, reptiles, and various species of fish. While hunting for their prey, the Great Blue Heron will use its long neck to reel back, creating an “S” shape, then after a long time of being still and calm, the bird will strike its prey, spearing it with their long bill. Afterward, they will shake their prey until it relaxes and gulps it down whole. Choking does occur frequently for the Great Blue Heron. Their sharp bill is perfect for spearing large fish and frogs, but sometimes their neck isn’t as adapted.

With the prey captured that doesn’t get consumed, both male and female Great Blue Herons will bring it back to their hatchlings. During mating season, these couples will stay monogamous and raise their babies together until they leave the nest. Mating starts in the spring when male herons will gather nesting material and present it to a female for approval. If all goes well, the males will also display their wings in a greeting while the females begin to make their nest. Groups of herons will quickly form to build their nests together in what’s called a “heronries,” some reaching numbers up to 500 individuals.  Here, nests are built up to 100 feet into the tree’s canopy and averaging at 20 inches across. However, Great Blue Herons will sometimes reuse their rest. This phenomenon resulted in one bird using a nest over a 4-year period with their nest reaching 4 feet in diameter and 3.5 feet in depth. Talk about a great big nest for a Great Blue Heron!