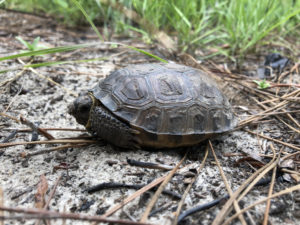 Photograph was taken by Peyton Niebanck

Being the only native tortoise in the entire southeast, it is no shock that the Gopher Tortoise (Gopherus polyphemus) is known for playing a big role in their ecosystem. In fact, their presence within their native range is so crucial, that they earned the title: keystone species! A keystone species can be any type of organism, weather fungi, plant, animal, or bacteria, that plays such a big role within their habitat, that without them, the ecosystem would fall apart. Gopher tortoises were built for this role in more ways than one. Adults can reach up to 15 inches in length and with elongated scaly forearms, and strong shells, this reptile was designed to dig deep! Gopher Tortoises build burrows to both lay their eggs in and hide from predators; but with some burrows going 45 feet deep, there is plenty of room to share!

This is where the name keystone species truly defines the Gopher Tortoise. Over 360 other animals are known to inhabit these burrows alongside the tortoise or after the tortoise abandons the burrow to build a new one. Some of the species known to do this are foxes, frogs, snakes, armadillos, burrowing owls, and more. Even endangered species like the Indigo Snake (Drymarchon couperi) rely heavily on these burrows for safety. But despite this seemingly foolproof survival strategy, Gopher Tortoises have still considered a vulnerable species in most of its habitat range which spans from eastern Louisiana to southern South Carolina and throughout Florida. In fact, of the six listed states that have known Gopher Tortoises residing within, three states have them listed federally as a threatened species.

Now with elephant-like hind legs and burrows 36 times their own size, it might seem confusing how this reptile could even get hurt! But because tortoises are ectothermic, or cold-blooded, they rely heavily on the heat that can not reach the innermost cavities of their burrow. So instead of laying their eggs deep inside, Gopher Tortoises must lay their eggs near the entrance of the burrows, where both the helpful sun and dangerous predators have full access. This causes the survival rates of juvenile tortoises to plummet down to only 3-5% before reaching maturity at 10-20 years. However, if the hatchlings can make it to this age, they can live up to 80 years old (100 in captivity)!

Photograph was taken by Peyton Niebanck

Many programs have been started to increase the survival rate and population size of these tortoises across the southeast, but more work is needed to save these keystone species. In order to build their fortress-like burrows, they need a habitat with plenty of well-drained soil. These conditions are found primarily in the same habitat where longleaf pines grow. Because 80% of this habitat falls within private property or corporate hands, programs work heavily with the landowners to show the true benefits of having Gopher Tortoises on your property as well as offering incentives. Even here at GWF, we strive to protect the Gopher Tortoise population through the Private Lands Stewardship Program, which focuses heavily on the belt of longleaf pine trees that, within Georgia, grow south of the Fall Line. Find out more about this program here: https://gwf.org/privatelands/.