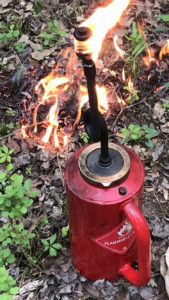 Early succession plant communities dominated by grasses and forbs provide a critical habitat component for a variety of wildlife species in the Southeastern United States. However, fire suppression efforts, accompanied by land use changes and other factors to be discussed in a later piece covering the decline of longleaf pine forests and associated wildlife species, have led to a drastic decline in the availability of herbaceous-dominated early succession habitat for wildlife. Accordingly, restoration programs and management activities are often focused on increasing habitat quality for wildlife species dependent on herbaceous plant communities and prescribed fire is an integral component of such efforts. Therefore, a drip torch is one of the most important tools for land owners and managers. In this segment of the Georgia Wildlife Federation Private Lands Stewardship Program’s Habitat Management Tools of the Trade, we will cover a selection of applications of prescribed fire that can be implemented using a drip torch.

Frequent, low-intensity fires historically burned throughout the Southeast and were critical for maintaining the vast expanses of longleaf pine forests and associated understory plant communities. These fires played a vital role in clearing ground space for longleaf germination, controlling seedling competition, initiating rapid vertical growth as seedlings exited grass stage, controlling non-longleaf woody competition, and maintaining an herbaceous-dominated understory that was vital for numerous species of wildlife. However, natural fire regimes have been altered and prescribed fires are now paramount in importance for longleaf pine restoration efforts. Applying prescribed fire early in the life of a longleaf stand and frequently throughout the rotation maximizes the extent and duration of availability of quality habitat and reduces need for mechanical and chemical treatments. 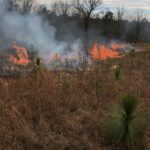 Photo 1: Land managers often encourage applying prescribed fire to plantation longleaf pine stands within the first 2–3 growing seasons. The early application of fire is important for reducing seedling competition and the frequent application of fire throughout the rotation is critical for controlling understory plant community succession. Designation of fire return intervals is a function of management objectives and understory responses to fires and will be discussed in a future segment. 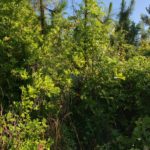 Photo 2: A seven-year-old longleaf pine stand that has been burned on average once every 3.5 years. The understory is dominated by shrubs and woody vines and a woody midstory is beginning to develop. While shrubs and vines do have wildlife value, the condition of this stand is far from the desired conditions associated with longleaf pine restoration. Look closely and you can see me in there! 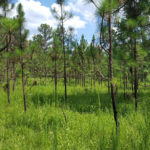 Photo 3: A 13-year-old longleaf pine stand that has been burned on average once every 2.2 years. The understory in this stand is dominated by grasses and forbs and has some scattered shrubs. This stand supports coveys of northern bobwhite year-round, provides brood rearing and nesting cover for eastern wild turkeys, provides warm season forage and fawning cover for white-tailed deer, and provides exceptional habitat for a variety of other wildlife species dependent on herbaceous plant communities. 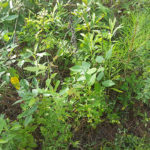 Photo 4: An example of a diverse herbaceous understory in an 11-year-old longleaf pine stand that has been burned on average once every 3 years. In the absence of prescribed fire, the loblolly pine seedlings will outcompete the grasses and forbs. 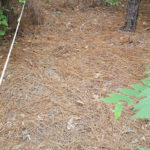 Photo 5: A 17-year-old longleaf pine stand that has been fire-excluded for more than 10 years. Notice the absence of understory vegetation and the presence of midstory trees, shrubs, and vines. Although this is a planted longleaf pine stand, at the time of this photo the overstory tree composition was only 37% longleaf pine! 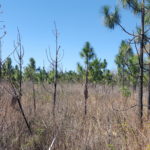 Photo 6: While longleaf pines are fire-tolerant, it is important to note that they are not fire-proof! While prescribed fire is a valuable management tool, it must be implemented with caution. We will discuss the importance of prescribed fire frequency, seasonality, and intensity in a future segment! 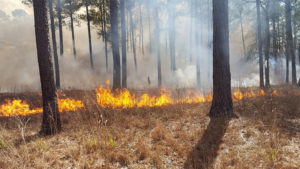 While the primary objective for most loblolly pine stands is often timber production, loblolly stands can be dually managed to provide wildlife habitat. Unlike longleaf pine, fire is generally not applied early in a loblolly rotation because loblolly pines are not as fire-tolerant as longleaf. In addition, canopy closure occurs much more quickly in a loblolly rotation, thus limiting vegetative responses to fire. Therefore, prescribed fire is most commonly applied after the first thinning and beyond. In fact, frequently-burned older loblolly stands that are maintained at lower basal areas (refer to Habitat Management Tools of the Trade: Wedge Prism, 16 April 2020; https://gwf.org/wedgeprism/ ) can provide exceptional upland game bird habitat. 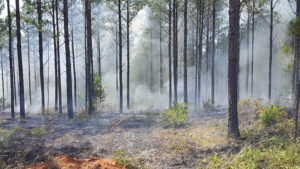 Photos 7 and 8: While there are often misconceptions about burning in pine stands other than longleaf, prescribed fire can be effectively applied mid-rotation in loblolly pine stands for woody competition reduction and promoting herbaceous plants. In fact, if enhancing wildlife habitat quality is a primary management objective, prescribed fire may be a preferred alternative to chemical and mechanical treatments. For example, after a thinning operation sweetgum will likely heavily invade disturbed areas and prescribed fire can limit the intrusion and keep the sweetgum from outcompeting preferred grasses, forbs, and shrubs. See Photo 9 for an example of post-disturbance sweetgum proliferation. 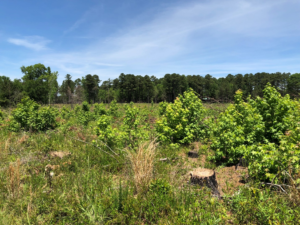 Photo 9: Sweetgum proliferation during the first growing season after a clearcut. While it may be complicated to kill sweetgum with prescribed fire, the application of prescribed fire to recently disturbed areas (such as take rows in a timber thinning operation) can be beneficial for helping reduce the detriments of sweetgum on herbaceous plants.

Prescribed fire can also be applied to hardwood stands for woody competition control, promoting herbaceous plants, and promoting hardwood natural regeneration. However, if you are burning for woody competition control such as eliminating sweetgum or privet, it is important to consider the species of hardwoods that are in the canopy. Specifically, a fire intensity necessary to kill competition may also injure preferred canopy trees. Additionally, if you are burning to promote herbaceous vegetation, the vegetative response will be limited by canopy light interception. If there is not sufficient light getting to the forest floor, then herbaceous plants will not respond extensively and canopy reduction may be necessary. We will cover forest stand improvement (including canopy reduction techniques) in a future segment. 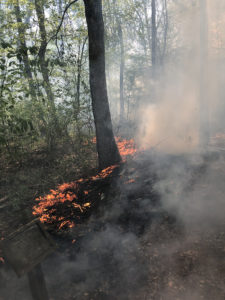 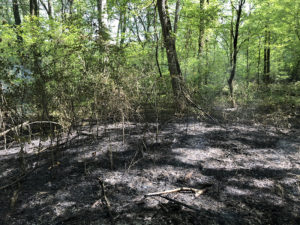 Photos 10 and 11: A recent fire applied to a hardwood stand at the Alcovy Conservation Center. Although we had to keep the intensity low due to the proximity to infrastructure, we did achieve some midstory shrub control.

For more information on ways to apply prescribed fire on private lands in Georgia and to schedule an AT-NO-COST site visit and property assessment with the GWF biologist, visit https://gwf.org/privatelands/ or call 770-787-7887.