For the last three years, the Young Alumni Committee at the Warnell School of Forestry and Natural Resources has hosted the Alumni and Friends Sporting Clays Tournament. This event, held on a Friday in mid-April, is a perfect chance for students, faculty, alumni, and other friends of the school to network, make friends, and even tease a professor or two about their poor aim. 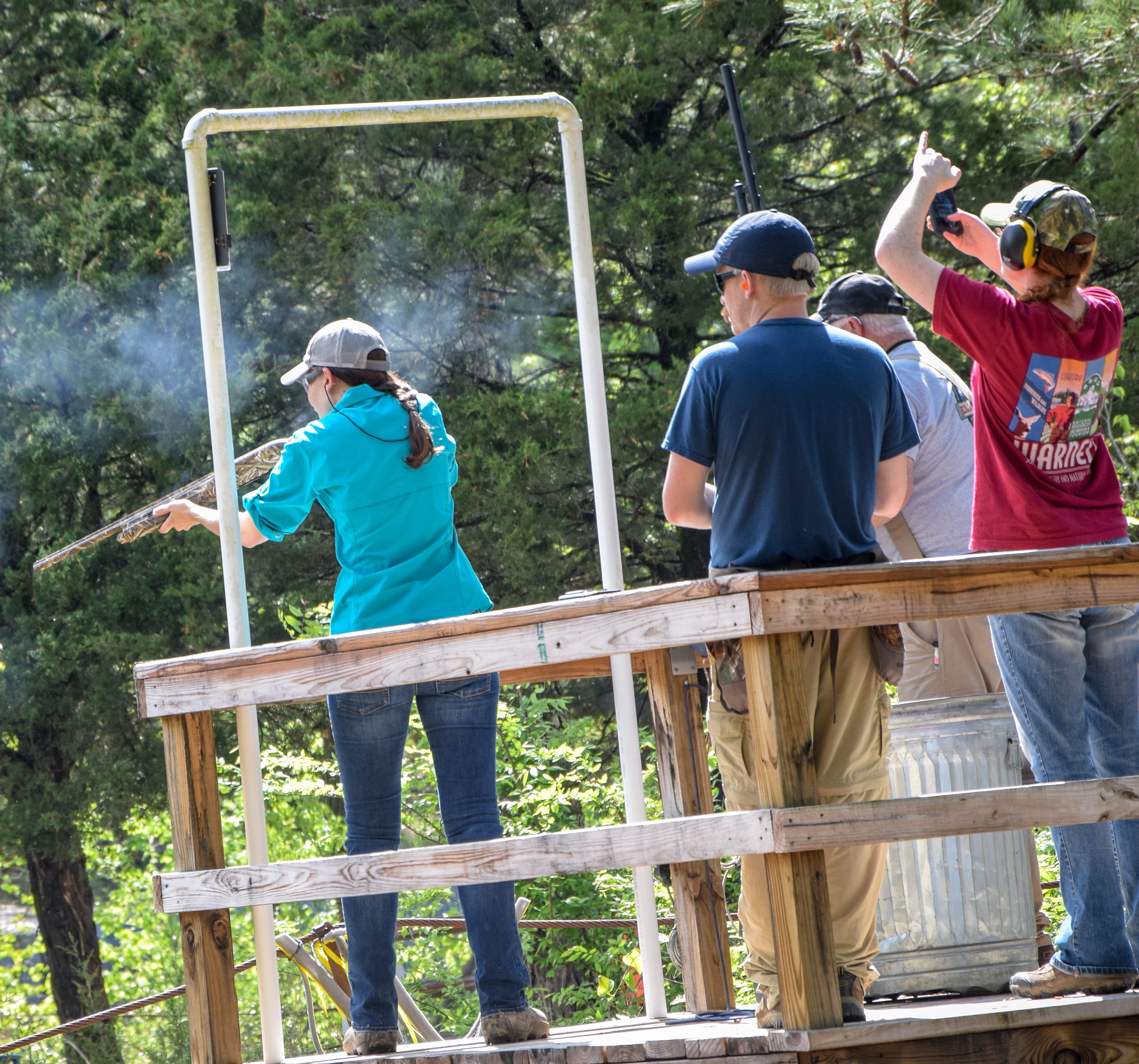 This year there were over 100 people registered! Funding from the National Shooting Sports Foundation and an ammunition donation from Ervin Industries made it possible for me to train new student shooters so they could participate as well. These students’ shooting experience ranged from having shot pellet guns as kids to having never seen a firearm in real life!

To start things off, we traveled south to the Charlie Elliott Wildlife Center for a little bit of range time. The range operators at the Clybel Gun Range provided us with a couple of clay-throwers and our own section of land to shoot on. Despite the rainy weather that morning, the skies were clearing up and the sun began peeking through the clouds; a beautiful day for shooting!

Before handling any firearms, we talked about the fundamental rules of firearm safety as a group. Shooting sports are statistically some of the safest, and the primary reason is smart shooters respecting these rules. Discussing these rules is quick, easy, and will make the difference between a fun afternoon and a stressful situation. Plus, timid new shooters are often comforted after they understand how to properly handle firearms. 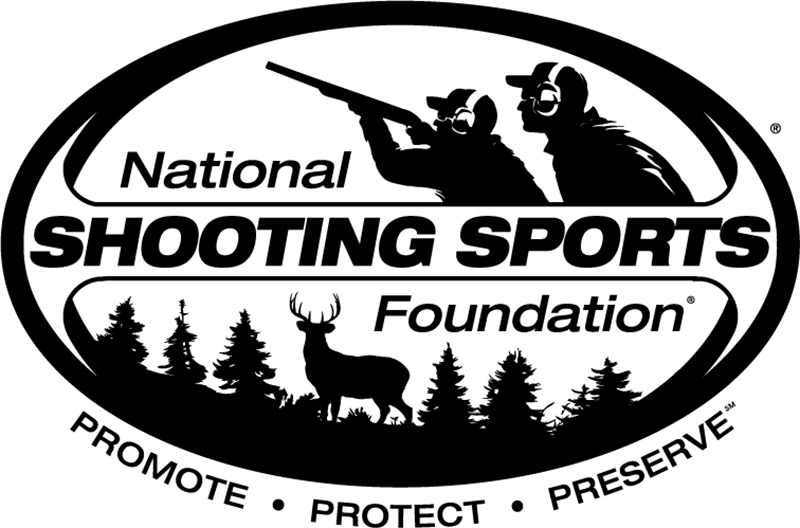 After our safety briefing, we took volunteers for the first shooter. Our first shooter was a graduate student from Nepal named Sagar. Sagar told us that he had never seen a gun before in real life! Although he was tense at first, the smile that cracked his face after his first shot proved to be a consistent reoccurrence. It was clear, he was hooked!

As we rotated through the new shooters, everyone became more and more comfortable after partaking in the fun. Even the folks who had never handled a firearm before soon started to break clays; before long the satisfying crunch of a clay turned to dust echoed frequently across the hillside.

After an hour or so of folks wanting “just one more shot”, we were satisfied with the training and ready to head home. Brimming with excitement for the Alumni and Friends Sporting Clays Tournament that week, we talked firearms the whole ride home. 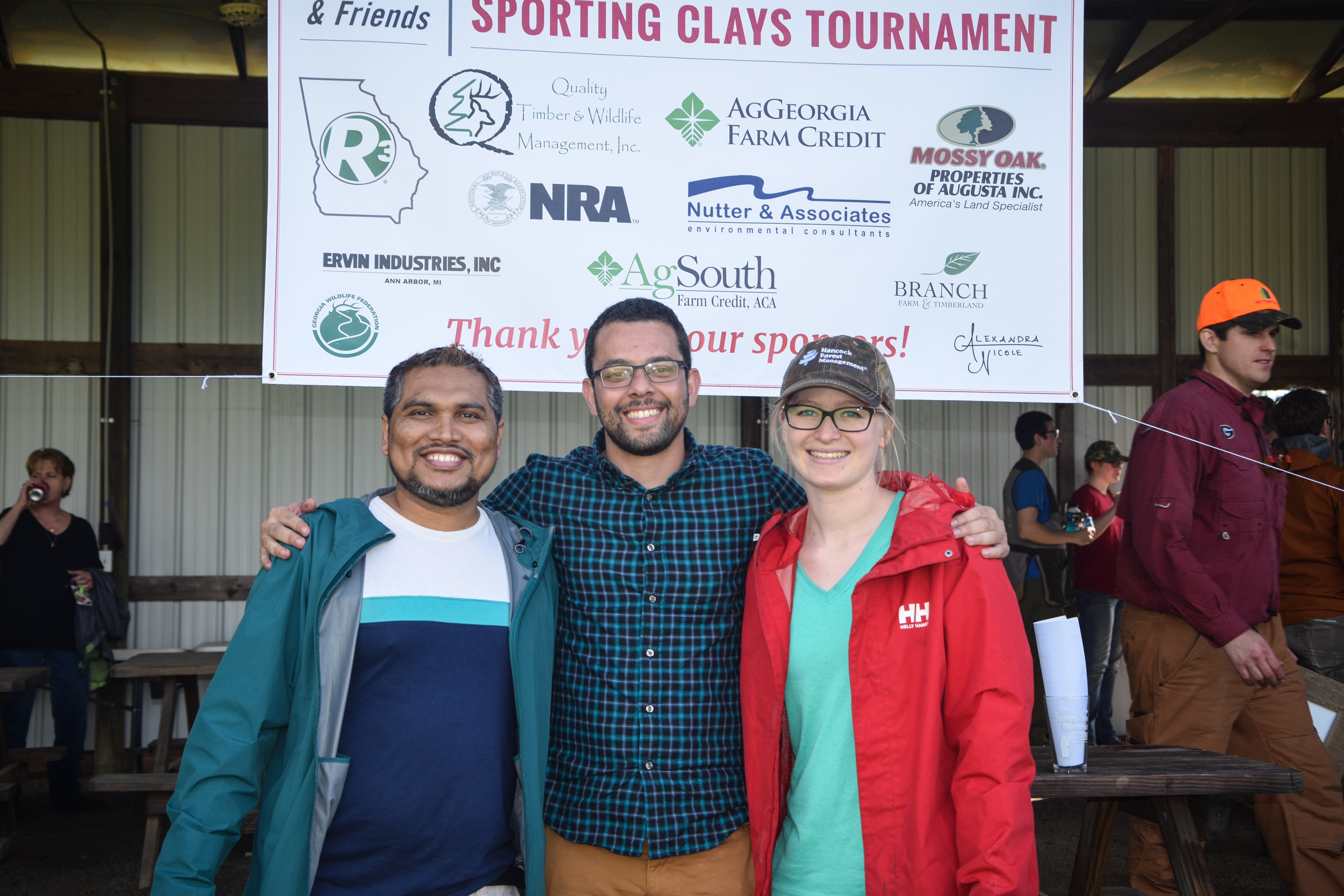 After several days of waiting, the day of the sporting clays tournament had arrived. Torrential downpours threatened to wash the day away, but again the weather worked in our favor. In the sunny moments between rain showers, shooters found themselves admiring the beautiful sporting clays course found at the Elbert County Gun Club. No amount of precipitation could dampen their spirits. After chatting with shooters Charles Evans and Steven Castleberry, I came to find that many shooters were thrilled to be able to add extra excuses to their book, such as “I got rain in my eyes” and “my glasses are fogging up”.

At the end of the day, none of our new shooters ended up bringing home the first-place prize. However, they all brought home an insatiable desire to try shooting again, as well as a desire to learn more about owning and using a firearm. Sometimes, all it takes to recruit a new shooter is to show a little kindness, respect, and give them an opportunity to try it out for the first time. In my experience, even the most shooting-opposed individuals will eventually admit that safely shooting a firearm is incredibly fun once they try it!

About the Author: Seth Cook is a senior in the Warnell School of Forestry and Natural Resources at UGA where he is pursuing his bachelor’s degree in Wildlife Sciences. Seth is currently serving as the President of the UGA Chapter of The Wildlife Society and has been involved in campus R3 efforts since 2017. As the Campus R3 Coordinator for UGA, Seth is creating programs to introduce students to hunting and the shooting sports that have never had the opportunity to participate. His position is supported by the National Shooting Sports Foundation.