The Snake with the Misleading Name 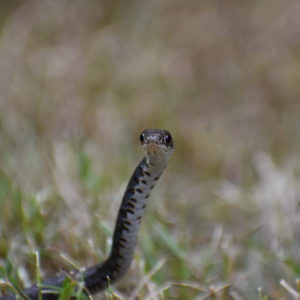 The photograph was taken by UGA Warnell student Victoria Hall

The black racer (Coluber constrictor) is a non-venomous snake found all over North and South America’s east coast. Once an adult, the black racer develops its smooth black scales and often a charismatic white/gray chin. Black racers are commonly mixed up with black rat snakes (Pantherophis obsoletus) and after a misidentification in 1758, black racers were labeled with the specific epithet “constrictor” despite not being a snake that constricts its prey!

The black racer also uses mimicry through the young’s coloration. Instead of being hatched with all black scales, the hatchlings will have variations of red, grey and yellow spots covering their back. With a clutch-size of 20 and limited parental care, this adaptation allows the hatchlings a chance to trick predators into thinking they are venous and should be left alone. In fact, the black racer won’t get its full set of black scales until it reaches 30 inches in length, often around reproductive age.

Reproductive age occurs in black racers at 2-3 years, depending on gender. Like mentioned previously, after laying their eggs, adult black racers leave the hatchlings alone to raise themselves; however, they ensure survival by laying their eggs in other animals’ burrows. This is done often in the same burrow with other black racers or other snake species in late April- early June. Eggs will hatch in the fall, just with enough time for them to grow large enough to survive the winter hibernation in burrows similar to the ones they were laid in.

Thank you to the following sources for their information on this topic: