Beat the Heat- Tips to Stay Cool from the Animal Kingdom 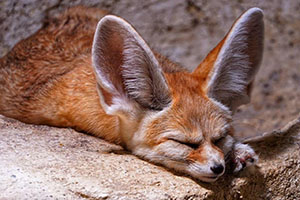 With the ocean taking up 71% of the Earth’s surface, only 57,308,738 square miles are left for the terrestrial creatures of the world. Grasslands, rainforests, temperate forests, evergreen forests, and more make up a small portion of the Earth’s land. 33% of this land is comprised of deserts, which are defined by a lack of water, vegetation, and sometimes the overwhelming presence of sand. Deserts can be either hot or cold, with the largest desert in the world being the entire continent of Antarctica, a cold desert. However, most Americans associate deserts to be areas of hot temperatures, like the world’s largest hot desert, the Sahara Desert. Here, the highest recording temperature is a blistering 136° F in 1922. With the Northern Hemisphere celebrating the first day of summer today, June 20th, many of us are already sweating from the hot spring sun and can’t imagine surviving highs over 100° F. Yet, animals are able to survive in such climates, and some even thrive alongside the scorching sun.

The most well-known desert-dwelling animals come from the family Camelidae. This family consists of three extant species, the Bactrian camel (Camelus bactrianus), the Arabian camel (Camelus dromedarius), and the Wild Bactrian camel (Camelus ferus). These species are known to live in many different continents, including the hot and dry landscape of Northern Africa. The native camel species here is the Arabian camel, which has only one hump and thrives among the sand dunes and pyramids. It was once believed that the camel’s large hump was filled with water, allowing the camel to go long distances without taking a drink; however, this is only partially true. Arabian camels are able to go long distances without drinking water, but their charismatic hump is filled with fat, not water. Instead, these fat reserves will only act as a last resort for energy if food is not readily available. In fact, without consistent food and water, camel’s humps will become saggy as their body breaks down the fat cells.

So, in an effort to keep their humps intact, camels use an energy-preserving practice known as adaptive heterothermy. Humans, like many other mammals, prefer to keep their bodies within a small temperature range to ensure they stay healthy and happy. In order to do this, mammals often use a practice known as evaporative cooling, where they sweat and rely on the process of evaporation to cool them down. While this works well for animals with a steady influx of water, camels don’t have this luxury. Instead, camels have adapted over time to survive with a larger internal temperature range to avoid the need to sweat. In order to do this, camels must decrease the temperature difference from their body to the outside. So, as the temperature increases during the day, camels will absorb the sun’s rays and increase their body temperature as well. This process would harm humans, as our organs would fry from the inside; however, the camels thrive, as their bodies have already adapted to this stressor, and they save copious amounts of water they would otherwise lose to the environment through sweat.

Another animal brave enough to face the hot Sahara Desert is the fennec fox (Vulpes zerda). This species of fox is known for its abnormally large ears that help them listen and track down their next meal; however, these large ears don’t only help with dinner. Fennec foxes have adapted their large ears to help them stay cool. On the other hand, animals that are native to cooler climates will often have reduced ears, tails, or limbs to avoid losing body heat through their skin. This phenomenon is known as Allen’s Rule, where endotherms, animals that regulate their own body temperatures, will have shorter appendages in colder climates, and larger appendages in warm climates. In the case of the fennec fox and their large ears, this allows for an increased surface area for heat to escape from their body and keep them cool.

Besides their physical features, fennec foxes also use behavioral modifications to stay cool in the summer. In fact, the best way to avoid the heat is to stay out of the sun altogether! During the daylit hours, fennec foxes avoid the sun by curating burrows. Here they can camouflage their pale, tan-colored fur among the sand and avoid the heat underground. Fennec foxes will stay in these dens alongside their family groups until nightfall, where they are the most active. Being nocturnal not only allows for further avoidance of the hot sun but allows for dinner to be ready on time. The fennec foxes put their large ears to yet another task, as hunting in the dark can be difficult without stellar hearing. They are primarily insectivorous but are also known to eat rodents, lizards, eggs, and fruit to help keep them hydrated.

Our final animal built to beat the heat is more commonly known for its ability to stay warm in freezing temperatures: the penguin. In the cool temperatures, the black feathers on the back of the penguin act like a heating pad, absorbing heat to warm the skin’s surface. However, today’s feature penguin species prefer the heat and lives at the southern-most tip of Africa, the African penguin (Spheniscus demersus). Here, temperatures rise in January, leaving the Africa penguins the need to cool down. Opposite to their cold temperature “relatives,” these penguins rely on not their black back feathers, but instead on their white belly. In the warm months, they will stand facing their belly towards the sun in an effort to reflect as many sun rays off their skin as possible to avoid absorbing any heat. If this doesn’t work, they will simply rest in the shade provided by the surrounding rocky habitat.

Sometimes these forms of behavioral thermoregulation are not enough, and more drastic measures are needed. Luckily, the South Atlantic current provides a great food source and escape from the sun. If overheated, the penguins will simply jump into the nearby ocean to cool themselves down. Upon exiting their ocean dip, the penguins will further cool themselves down as they dry. They will then open their mouths, to resemble a dog panting, and cool down their blood as it travels through their bloodstream, and spread their flippers, allowing the evaporating water from their wings to cool them down.

In all, the animal kingdom has spent millennia adapting to the terrestrial world and its diverse biomes. With the Sahara Desert reaching temperatures of 136° F in the summer months, it is no wonder so many different methods are used to fight the heat. Whether it’s large back humps, large ears, white bellies, or a lot of sunscreen, there is plenty of lessons to learn from the animal kingdom on how to stay cool this summer.

Thank you to the following sources: