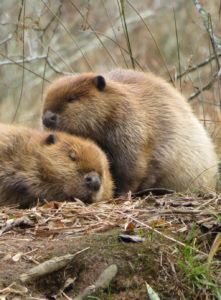 Reaching up to 60 pounds, the American beaver (Castor canadensis) is North America’s largest rodent. Accounting for a lot of their weight is their disproportionally large skull and teeth. These features are crucial for the beaver’s very specialized diet of tree bark and cambium (the soft tissue that grows underneath the tree’s bark). Their strong skull allows for a powerful bite, sending the beaver’s upper incisors (front teeth), through the tree effortlessly. These incisors are bright orange, 5 mm wide, and continue to grow throughout the beaver’s life, but typically stay around 20-25 mm long due to constant wear.

Another feature that accounts for most of the beaver’s weight is their dense fur. Because beavers spend the majority of their life in the water, it is important that they stay warm and dry. To do this, beavers have both a thin undercoat and a thick overcoat consisting of guard hairs, which keeps water far from their skin. Beavers will also add another level of protection to their fur by producing castoreum, a thick oil, in their scent glands, which they lick onto their fur, causing water to roll straight off! Beavers rely on their fur so much, that even their kits have a full set of fur at birth; however, beavers will never develop hair on their tail. Because young beavers (kits) are prey species to bears, wolves, and other carnivores, they rely on warning calls from their parents to know when to hide. Warning calls can be vocal, but most commonly are produced from the adult beaver slamming their hairless tail onto the water, creating a loud slap-like sound. This loud warning will quickly send the kits into their homes, which is also known as a dam or lodge.

Beaver lodges are made up of sticks, moss, and grass, all stuck together with mud. These lodges not only serve as a resting place for beaver colonies but create important ecosystems for thousands of other species. Without beavers, water distribution could lead to certain cities becoming completely waterless and endangered species becoming homeless. In fact, in 1948 the Idaho Fish and Game Department noticed that the areas that lacked beavers saw an increase in erosion and flash floods and a decrease in habitat quality for their native species. In an effort to fix this solution, they hired professional trappers to take beavers in densely populated areas and transport them to target locations. As mentioned previously, beavers are semi-aquatic, and get overheated while in the sun; so, when transporting the beavers from county to county, researchers saw high death tolls. In an attempt to safely and quickly move the beavers, conservation officers used a plane and surplus of World War II parachutes to ensure beavers would survive their long adventure. While this may seem silly, it worked wonders! 76 beavers were relocated seamlessly and even found all of them building lodges, having kits, and thriving just a year later.

Author’s note: Special shout-out to Cooper and Phyllis for being my biggest supporters and for always sharing my work. I love you both!